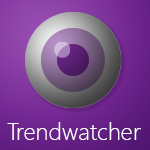 Trendwatcher is an app that displays trending topics from Twitter by showing tweets with images. It can gather topics from various locations, custom keyword searches and your personal timeline. Each topic can be updated live to track major news events. In 2013 for instance this happened with news about the new pope, the Boston marathon bombings, the Royal baby and the Edward Snowden revelations.

Trendwatcher is a free application and tries to monetize it’s use by showing advertisements that are designed to blend in with content. Furthermore the user is offered to remove advertisements through in app purchase. So far only two users did this.

Although download numbers are satisfying the amount of users that actively use the app is still pretty low (less than 10 users per day) so there is still a lot to win there (for instance using live tiles) This results in a few dozen impressions per day and therefore only a few cents per day resulting in a total revenue of less than 10 dollars for the whole year.

Stay on top of the news

If you would like to see how Trendwatcher keeps you right on top of the news download it from the Windows Store now.

You may also enjoy...